Goats are a wonderful choice for an animal to keep on a homestead. They provide delicious milk which can be used for cheese, yogurt, even butter. They help out with clearing land or mowing since they are notorious for eating nearly everything (we’ve all seen the ubiquitous imagery of a goat gnawing on a can). Meat breeds of goat can quickly and easily fill up your freezer with delicious, nutritious meat. They are also relatively easy to care for, and, since they can provide either meat or dairy, are much smaller and easier (not to mention cheaper!) than cows.

If you’ve ever thought about starting livestock on your current or future homestead, goats are a great animal to start with. In fact, they were most likely one of the first livestock choices that the human race made.

Archaeologists believe that goats were one of the very first animals domesticated by man. Their remains have been found in geological deposits that scientists say are millions of years old, some even resembling a now-vanished native British breed of goat in that region.

Evidence of their domestication has been found at historical sites like Jericho, from as far back as 7,000 years ago. The evidence of both domestication of goats and interactions with their wild counterparts only mounts as civilization continued.

Goats are found in ancient artwork and literature from nearly every continent. and remain a constant presence in 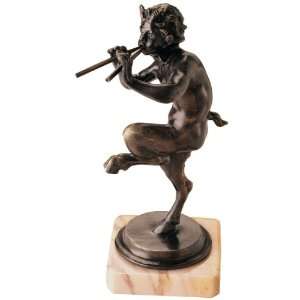 many countries to this day. The mythology of many ancient peoples is full of references to goats or goat-gods, particularly in Greek mythology, which tells of a goat that raised the god Zeus, who in turn placed this goat in the night sky, as the sat Capella. Dionysus, the god of decadence, suckled on goat’s milk while Pan, the god of mountains, shepherds, and flocks, has goats legs and horns.

You’re probably very familiar with the images of Pan, pictured to the right.

The goat also plays a prominent role in the Bible, in both the Old and New Testaments, and historical evidence confirms that the people in the region the Torah was written would have been avid goat herders as well as shepherds. The stories of the Old Testament are full of accounts of a life lived among flocks of goats and sheep, and the goat became an important sacrificial animal in the Law given to the Hebrew people by Moses.

Due to a certain reference to goats in the New Testament, they have come to be associated with Satan and evil. In the Book of Matthew, Jesus says he will return to “separate the goats from the sheep”. Between this and the role goats play in many pagan cultures, worship of the goat mostly ceased as Christianity spread around the world.

Regardless, the goat still plays a very important role in the world today. Nearly 75% of all the world’s goats reside in developing and under-developed nations, where entire communities can be wholly reliant on their goat herds.

The goat has played an important role in the development of humanity and, due to their usefulness, will clearly continue to do so.

[Bonus] This strange method will make your food last for 2 years without refrigeration.  Learn More>>>